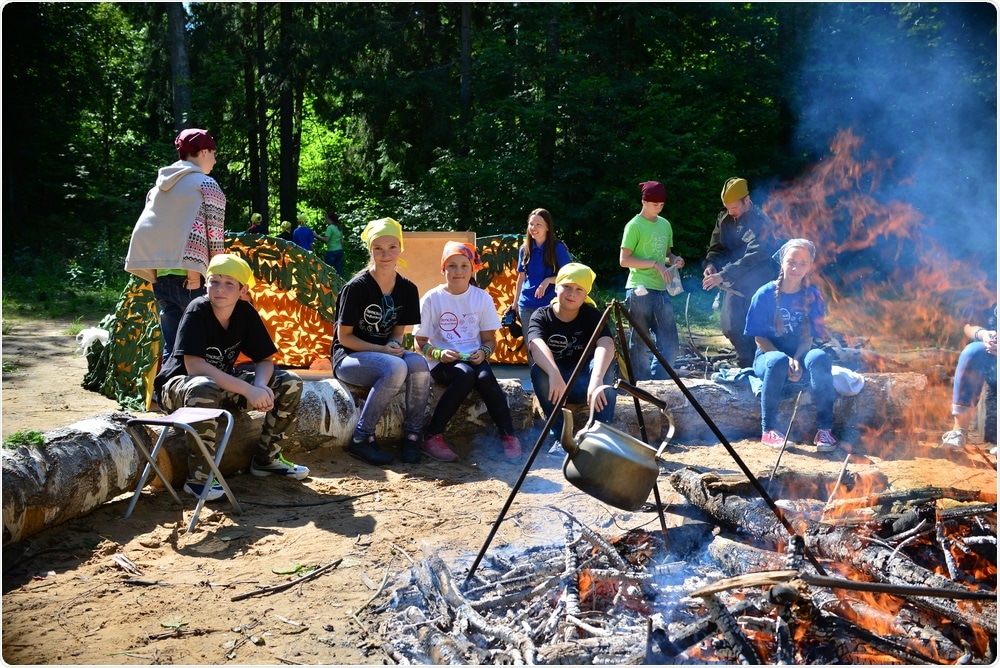 How can a summer camp run successfully during a rapidly spreading viral pandemic like the current coronavirus disease 2019 (COVID-19) outbreak, caused by the severe acute respiratory syndrome coronavirus 2 (SARS-CoV-2)?

A new report in the Journal of Public Health describes measures to ensure that youth activities at such residential camps can continue safely, based on sound epidemiological and infectious disease guidelines.

Previous studies indicate that COVID-19 primarily spreads through the respiratory route in the form of aerosols or respiratory droplets containing infectious particles. Touching an infected person or contaminated surfaces, and carrying the virus to one’s eyes, nose or mouth can also lead to infection.

Asymptomatic transmission appears to be a real event in a significant proportion of cases. This means that containing viral spread by quarantining exposed individuals for the duration of their incubation period is not possible for a large number of cases.

A recent residential summer camp in Georgia ended badly, with 44% of camp participants exposed to COVID-19 and 76% of individuals eventually testing positive. Conversely, four camps in Maine used mitigation measures along with infection prevention and control (IPC) strategies to host over a thousand people without reporting any SARS-CoV-2 outbreaks.

In these camps, a missing but significant feature was the resumption of normal camp activities, with the relaxation of IPC measures. The current study aimed at evaluating the efficacy of a three-step IPC strategy of serial testing, putting people into cohorts, and mandatory use of face masks, to allow a rapid return to normal camp activity.

What measures were used?

The researchers used this protocol to protect the camp staff and campers at a New Hampshire residential summer camp. Serial testing represents sequential testing that covers the incubation period, during which exposed campers are assumed to be in quarantine.

Testing began 1-8 days before arrival at the camp, on arrival, and 5-6 days after arrival. At the end of this period, a negative test implies that the person is uninfected. This would not only help identify incubating infection early on in its course but also allow camp staff to promptly initiate isolation measures to prevent viral spread among people in a residential setting.

Meanwhile, the campers and counselors were grouped by ten, and the groups were handled in isolation from each other. All staff were quarantined for two weeks on campus before the first camper arrived, with all three tests before, upon, and after arrival being negative. No potentially exposed staff were allowed on campus thereafter.

Staff groups were based on those who had been exposed to each other before arrival and by location and contained 10 or fewer staff. While cohort members could interact without masking at mealtimes and during their sleep periods, they had to wear masks when they were near others outside their cohort. This lasted for 5-6 days after arrival, after which all cohorts were allowed to mix freely.

Among the campers, age-, exposure-, and location-based cohorts were set up for the first six days or the third negative test. At mealtimes and sleep time, masks were not required within each cohort. Like the camp staff cohorts, campers did not have to wear masks after 5-6 days.

Infection control measures including temperature screening, hand washing, social distancing, and disinfection were also put into practice for the first 5-6 days. For the rest of the camp duration, hardly any IPC measures were required as long as no new COVID-19 cases were detected.

Families were required to help identify cases among their children before arrival, have a reverse transcriptase-polymerase chain reaction (RT-PCR) for SARS-CoV-2 completed prior to their arrival, and take travel precautions according to state guidelines.

Of approximately 430 individuals at camp, including 126 staff that was almost equally divided between male and female, one tested positive before arrival at the camp. This member self-isolated at home.

One camper also tested positive for COVID-19 upon arrival and was isolated and sent off the campus within 24 hours of arrival. All contacts with this individual were quarantined until two negative tests were obtained. All campers were negative.

Four individuals were tested for potential infection, either because of contact with the infected staff member or because of suspicious symptoms; however, all were negative for COVID-19.

Ultimately, all IPC protocols were able to be lifted within 6 days of the arrival of the campers, except for frequent disinfection, handwashing, and screening by temperature and symptoms. All campers remained negative for SARS-CoV-2 throughout the duration of the camp.

“This outcome shows that with appropriate IPC and testing, it is safe and feasible to conduct a residential summer camp that draws from a wide swath of the United States, including areas with high positivity rates, without SARS CoV-2 transmission.”

The findings of the current study advance beyond the reports from the Maine camps, where IPC measures were continued throughout the camp, unlike the relaxation of most components of the protocol in the current setting.

The essential conditions for this outcome include involvement of the families of the campers at a close level via virtual visits, as well as an explanation and emphasis of Centers for Disease Control and Prevention (CDC) guidelines, looking for symptoms and temperatures, and selectively quarantining camper family members at home.

Taken together, these measures helped ensure that campers were virus-free upon arrival. This was bolstered by serial testing and cohort formation, both of which were designed to limit exposure within small groups, even if an asymptomatic case were present in any cohort.

These findings could be helpful for boarding schools as well as colleges, nursing homes, and military bases once they are tweaked for the degree of isolation from the outside community that is possible in the latter settings as distinct from a summer camp. Finally, the current report strengthens the role of asymptomatic surveillance testing in environments without intensive control.

“Future studies of SARS-CoV-2 infection in educational settings should explore the impact of effective serial testing, social distancing, and cohorting among students to allow them to return to the classroom.”

Incredible Egg Hacks You Would Like To Try
MOM HACKS ℠ | HALLOWEEN! (Ep. 13)
DIY S’mores Root Beer Float YUM! l Food I How to Cook Craft & Cake It
CBD Oil For Kids: Is It Safe, Dosage, Side Effects And Risks
This federal election, I’m voting for child care—here’s why you should, too